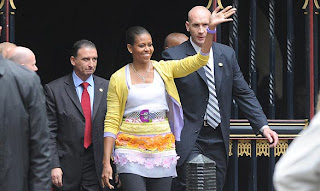 I came across a link to this video in the comments at Don Surber's.  This video, posted at Hot Air, shows the rock bottom depths the public sector unions have crawled to in Wisconsin.

Well, what can you expect from people who would interrupt a Special Olympics ceremony?
Posted by Carol at 4:25 PM 1 comment:

"We will only find success when a majority of Americans agrees with us that government is something worth fighting for.” - Jared Bernstein

Is it just me or is there something very sinister about that sentence? My country is worth fighting for and certainly my lifestyle is, but my government? Meh.

I could be wrong, but I don’t think that Bernstein and I are on the same page. Consider this quote on the debt ceiling debate:

"This was an ugly debate where reckless ideologues got the better of the grown-ups in the room who were not willing to risk the economy to protect the government."

Bernstein believes that "government" is so important that it is worth wrecking the economy for. I wonder if he felt the same during the Bush administration.

I think that fealty to government depends on how one defines government. I like being able to get from point A to point B and prefer a paved, pothole free road to speed my way. I appreciate that if a group takes it upon themselves to fly planes into American buildings that we have force to deal with the group and their supporters appropriately. For these things government is necessary. Mr. Bernstein believes that government is necessary to ensure that we all have the appropriate light bulbs in our homes. I'm sorry but government is not my Momma and even she doesn't attempt (or want) to micromanage my life.

To Bernstein, we of the low sloping foreheads just need to shut up, eat our peas and let the grown ups lead us around by our noses. It is for our own good. As it turns out , that is pretty much what we’ve been doing for decades. Now we have decided that maybe government isn’t all it is cracked up to be. It still has its uses but in its present form we just aren’t getting enough bang for our buck.

Cross posted at Potluck
Posted by Carol at 11:38 AM 3 comments: