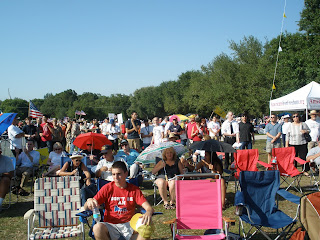 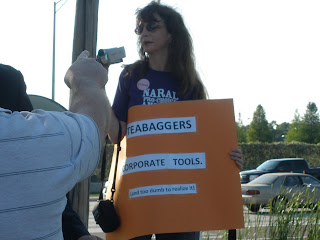 We also managed to score a couple of counter-protesters-a charming lady in a NARAL tee shirt and a man with a bullhorn wearing a white doctor's coat.  I assume he was representing abortion doctors since he was with the pro death chic.  Her sign reads, "TEABGGERS CORPORATE TOOLS and too dumb to realize it."  Glad she decided to keep it classy. 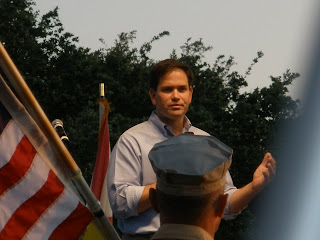 While all the speakers did a wonderful job it was Marco that everyone was waiting to see and he did not disappoint.  The video is not as clear as I would have liked and on several occasions Marco is obscured by a flag.  There was no way I was going to ask a man who had proudly held up an American flag for hours in 90 degree weather to move so I just made do.  In any case, it is Rubio's words we came to hear and he gave one very rousing speech.  And now, I am taking my very tired, very sunburnt self to bed.

Welcome to my blog Instapundit readers!
Posted by Carol at 11:26 PM 16 comments:

What if they shut down the government and nobody noticed?

Jesse Jackson compares it to the Civil War and Rep. Louise (she had to wear her dead sister’s teeth to the funeral) Slaughter (D-A galaxy far, far away) says that Republicans are trying to kill women. All I can say is that bloviators were born to blow.

Let’s put all this nonsense into perspective. The Dems declined to pass a budget when the ball was in their court. We’ve been running on patched tires ever since. Speaker Boehner has offered a bill to insure that our troops are paid in the event of a shutdown and the troop’s Commander in Chief has said that he will veto the bill if it hits his desk. Apparently Planned Parenthood falls under the category of “essential services”, our troops, not so much.

I have a theory on why Obama seems so keen to avoid a shutdown. Maybe he’s worried that the government will shut down and nobody will notice. Well yeah, the poor senators who are forced to push their own elevator buttons will notice but so what? A comment spied over at Hit & Run pretty much sums it up:


But the Dept. of Agriculture would shut down. Crops couldn’t grow, cows, goats, and chickens would stop producing, meat would turn to ash and fish would turn to salt.

Without the DOA’s regulations, farmers would plant their tools and thresh their livestock. Food-hauling trucks will drive into the sea, and sheep will start producing steel wool.

My fellow Conservatives, why do you want people to suffer so? What is it about misery that you value so highly? Forgive my sarcasm. It is a natural reaction to this tripe from Matt Yglesias (the emphasis belongs to Yglesias):

This put me in mind of Monica Potts’ review of Kay Hymowitz:

“Before [today], the fact is that primarily, a 20-year-old woman would have been a wife and a mother,” author Kay Hymowitz told the crowd of about 100 at the Manhattan Institute in New York City. Men would have been mowing lawns and changing the oil in their family sedans instead of playing video games and watching television. In previous decades, adults in their 20s and 30s were too busy with real life for such empty entertainment, Hymowitz says. “They didn’t live with roommates in Williamsburg in Brooklyn and Dupont Circle in D.C.”

Hymowitz’s argument, essentially, is that not only has feminism opened up new doors of opportunity to women, but it’s helped contribute to the growth of a society in which young men are less crushed down with family and household obligations and are spending more time enjoying themselves. Except she means this as a bad thing! In both cases the conservative conceit seems to be that a decline in human suffering is a bad thing because it leads to a corresponding decline in admirable anti-suffering effort….

We can argue whether the unobligated life equates to a happy life but to refer to men who have chosen to be family men as “crushed down” belies a liberal conceit. A certain amount of selfishness is necessary for happiness but a life based on selfishness alone is at best boring and at worst, lonely.

I suspect that Mr. Yglesias is incapable of understanding the joy that is inherent in the mundane trappings of the family life. Given the choice between hot dogs in the back yard and, well, anything else “anything else” would be the hands down winner. It makes me feel sorry for Yglesias. But on the other hand, I’ll happily breathe a sigh of relief on behalf of those never to be born children who will be spared the unhappiness of his uninterested parenting.
Posted by Carol at 10:59 AM 1 comment: