So was it just a rouge tweet or just another day in the life in the most transparent regime ever? 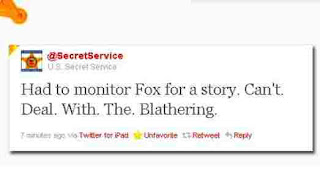 Well let's jump in to the Way Back Machine for a little context.  Who remembers August, 2009?  That is when this administration put out the word that citizens should report the "fishy" behavior of their friends, family and co-workers to the White House:

There is a lot of disinformation about health insurance reform out there, spanning from control of personal finances to end of life care. These rumors often travel just below the surface via chain emails or through casual conversation. Since we can’t keep track of all of them here at the White House, we’re asking for your help. If you get an email or see something on the web about health insurance reform that seems fishy, send it to flag@whitehouse.gov.

After the public outcry at the Administration's Third Reich tactics they shut down the program.  Or maybe they just took it underground.  Your tax dollars at work, folks.
Posted by Carol at 11:28 AM