Today is a New Day

At the morning meeting, an informal gathering of fellow co-workers dedicated to bitching (no work talk allowed), my co-workers were also reinvigorated.  I checked my emails and had this from one of my credit union members: 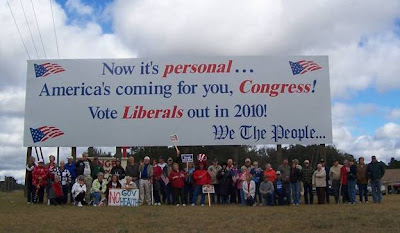 This sign has gone up on I-75 just north of here.
I asked a friend if he had looked at the info I had given him on Mike Prendergast, who is running against Kathy Castor here in the 11th District.  He answered that Kathey Castor is considered "safe".  When I replied that Martha Coakley was considered "safe" he paused for a moment, smiled, and said, "so how's it going for Sen. Coakley?"    Exactly.
So, today is a new day.  I'm ready to get back to work.
Posted by Carol at 12:37 PM

Quoted from and Linked to at:
DEFCON 1: 'What Comes Next? We Fight.'
-----
It's Time To ROC 'N' ROLL:
Restore Our Constitution & Restore Our Lost Liberties