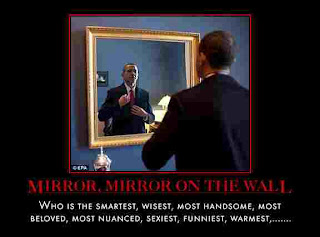 Gee, who'da thought that a man who had written two memoirs by the time he was forty-five might just be a tad full of himself?

At his November 12 press conference in Seoul, President Obama was asked the following question by CBS’s Chip Reid: “What was the number-one complaint, concern, or piece of advice that you got from foreign leaders about the U.S. economy and your stewardship of the economy?”

Whereupon the president began his response with a complaint: “What about compliments?” he asked. “You didn’t put that in the list.”

Pair that with another recent "But let's get back to me" moment and you might detect a pattern:

MR. KANSAGRA: Thank you. Welcome, Mr. President, to India. As a fellow Kenyan, I’m very proud to see that you have made –

THE PRESIDENT: Made something of myself. (Laughter.)

MR. KANSAGRA: — India as the focus of your drive for exports out of the U.S.

Remember, this the man who referred to himself one hundred and thirty-two times during the State of the Union address.  This is a man who never met a talk show he wouldn't appear on.  He is da bomb, the bag of Cheetos and President who put the sexy in the bee's hot little knees.  Just ask him.  You don't like ObamaCare?  Barry just needs to talk to you-some more.

Pat Caddell and Doug Schoen are calling for Obama to announce that he will not run for re-election:

"If the president goes down the reelection road, we are guaranteed two years of political gridlock at a time when we can ill afford it," Caddell and Schoen write in Sunday's Washington Post. "But by explicitly saying he will be a one-term president, Obama can deliver on his central campaign promise of 2008, draining the poison from our culture of polarization and ending the resentment and division that have eroded our national identity and common purpose."

You might think that by announcing he will not run, Obama would be telling the world that he is too weak even to try for re-election. Not so, say Caddell and Schoen. "Forgoing another term would not render Obama a lame duck," they write. "Paradoxically, it would grant him much greater leverage with Republicans and would make it harder for opponents such as Senate Minority Leader Mitch McConnell -- who has flatly asserted that his highest priority is to make Obama a one-term president -- to be uncooperative."

Does anyone really believe that Obama's ego would allow him to forgo a possible second term?  Granted, walking away beats the hell out of losing but the likelihood of it occurring to Obama that he could lose is somewhere between zip and nada.

We are stuck with Obama and his ego for two more years.  It is my greatest hope that the next election will be about substance rather than faux star power.
Posted by Carol at 6:48 PM