That pretty much sums up my reaction to learning that Howard Zinn was a card carrying Commie.  Zinn’s A People’s History of the United States could have just as easily been titled America is the Most Evil, Corrupt Country that Ever Was or Ever Will Be.  Stacy McCain has poured through the recently released FBI documents on Zinn and offers this keen observation:

Read the rest of that. What is important to note here is that Zinn evidently joined the Kremlin-controlled CPUSA not during the “Popular Front” era of the 1930s — when many idealists were seduced — but after the 1939 Molotov-Ribbentrop Pact in which Stalin cruelly and cynically sacrificed Poland to the Nazis. Zinn was a card-carrying Commie who advocated Marxism-Leninism after the Red Army’s ”Iron Curtain” occupation of Eastern Europe, after the treachery of the Rosenbergs and Alger Hiss had been revealed, and even during the height of Stalin’s anti-Semitic “Doctors’ Plot” purge!

UPDATE: Going through the PDFs and — wow! — Zinn’s file from the 1940s and ’50s makes for fascinating reading to anyone familiar with Communist Party history. Any innocent liberal might have unwittingly joined a CPUSA front group or two. But only a card-carrying Commie would have joined every front group that came along, as Zinn evidently did:

“ZINN came to Washington, D.C., on March 25 [1948], and helped picket the White House on March 26, 1948, in connection with the picketing sponsored by the American Committee to Protect the Jewish State and the United Nations. ZINN indicated that he is a member of the Communist Party and that he attends Party meetings five nights a week in Brooklyn.”

Had Zinn's influence peaked in the 40's and 50's and then quietly faded away the FBI files would be nothing more than an interesting read.  However, Zinn didn't fade away and thanks to lefty Hollywood, he was able to spread his anti-American bile right up to his death and beyond. 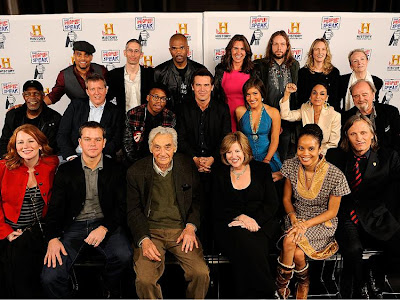 Above is the cast from The People Speak, Zinn's Hollywood adored piss on America.  A partial list of the of the actors shown above, Jasmine Guy going all "power the people" in the second row, Josh Brolin, Danny Glover, Rosario Dawson, Matt Damon and Zinn's number one fan and propagandist, Viggo Mortensen.  Zinn specialized in telling history that somehow avoided ever being told before but when all the witnesses are long dead and many of events are unrecorded that isn't really such a difficult task.
Zinn would have liked to have affected the Republic but he never did.  He was a Commie crank who had little influence outside of his own disaffected social circle.  The average person simply isn't interested in listening to people who have benefited enormously from capitalism like say, Matt Damon or Viggo Mortensen, lecturing to them on the virtues of Communism.
Read Stacy's entire post.
More at:

Where I grew up we had a cure for afflictions such as this. Vigilance Committees. 3-7-77