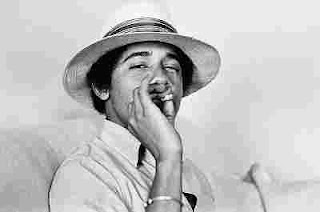 Barack Obama promised us change and say what you will, he has delivered.  Unfortunately, Obama's change has been of the unpleasant variety.  Perhaps a quibble in the greater scheme of things but "presidential" will never be defined the same post-Obama.

What music have you been listening to lately? What have you discovered, what speaks to you these days?

…Thanks to Reggie [Love, the president's personal aide], my rap palate has greatly improved. Jay-Z used to be sort of what predominated, but now I've got a little Nas and a little Lil Wayne and some other stuff, but I would not claim to be an expert. Malia and Sasha are now getting old enough to where they start hipping me to things. Music is still a great source of joy and occasional solace in the midst of what can be some difficult days.

So, does daddy Barack share his appreciation for Lil Wayne with Malia and Sasha? What’s their favorite Lil Wayne ditty? Maybe it is “Lollipop”-that sounds like a kid friendly tune. Let’s look:

Lick the rapper (insert a Beavis and Butthead moment here).  Seriously, that is what the president of the United States listens to for enjoyment? Really? Of course, the song also includes this verse:

Hillary must be proud.

I don’t know but I think our president just out-cooled himself. Let’s face it, songs of this genre are aimed at immature, sexually stunted, morally vacant, sexist little boys. I don’t believe for one minute that Obama allows his daughters to listen to this crap. But he desperately wants the Rolling Stone demographic to think that he is one of them. Why? Beats the Hell out of me- I just know it is embarrassing. Perhaps Obama should consider sharing a little less and governing a little more. And if he must project an image, he might try faking a little leadership.