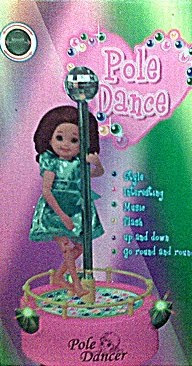 It took a few moments, but I realized that I was sitting in a state of slack jawed shock. Pole dance dolls? Are you kidding?
It is one thing to talk openly and honestly with children, in keeping with their age level, about sex. Children are curious little creatures and their questions are best answered by their parents. Sexualizing children is a whole different story.
Once upon a time, childhood was a magical, innocent time. We were ignorant and ignorance really was bliss. We didn't have body image issues and we didn't worry about looking "sexy" because we had no clue what sexy was.
We do our children no good by rushing them in to adulthood.
The Other McCain has the entire story. For my part, I'm feeling sick.
UPDATE:
From Gateway Pundit, New-- Pole Dance Doll For Little Girls & Tassle Tees For Tots:
The designer, Suzi Warren, told ParentDish via email that “The Nipple Tassel t-shirt was designed as a response to my own distaste at seeing mini versions of sexy clothes on young children. Five-year-olds wearing slashed mini skirts and boob tubes, little thumb-sucking Britneys.” I guess that’s like wearing blackface to protest racism? Mostly Warren is doing it to make money. At least I hope that’s why. If she honestly believes that this is an effective form of protest, I’d hate to think what she’d do with an issue like health care reform.
At the end of the day, the most disturbing aspect is that there are parents who will buy this crap for their little girls. They'll think it's "cute" and then a few years down the road wonder what went wrong.
Posted by Carol at 1:11 PM

Email ThisBlogThis!Share to TwitterShare to FacebookShare to Pinterest
Labels: Sickos