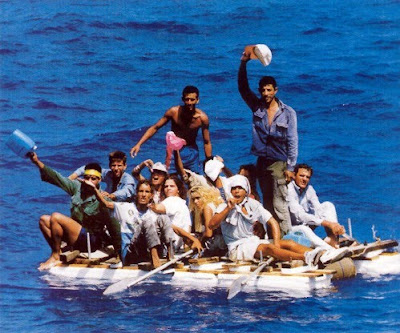 With a few sentences, Stacy McCain gives us much to think about:
"Whittaker Chambers . . . wrote that the crisis of the Western world exists to the degree in which the West is indifferent to God, the degree to which it collaborates in communism's attempt to make man stand alone without God. And then he said, for Marxism-Leninism is actually the second-oldest faith, first proclaimed in the Garden of Eden with the words of temptation, 'Ye shall be as gods.' The Western world can answer this challenge, he wrote, 'but only provided that its faith in God and the freedom He enjoins is as great as communism's faith in Man.' "-- Ronald Reagan, March 8, 1983
What's wrong with Marxism? And what's wrong with a member of the U.S. Congress praising Fidel Castro? To begin with, as I said, it is a repudiation of the American founding. Our nation was not established by theoretical philosophes, and it did not grow strong and flourish by heeding the flattering "words of temptation."
McCain is referring to Rep. Diane Watson’s praise of Fidel Castro and Che Guevara. Well, we’ve heard the praise before but it never ceases to stun. Those who cast Cuba as an island paradise are ignore some rather pertinent facts:
In 2006, the per capita income in Cuba was $4,100. That same year, Fidel Castro’s personal wealth was estimated at $550 million. Why the disparity? Because the people work for Fidel, not themselves. But Watson doesn’t address that does she? She’s in good company. Hollywood elites swarm to Cuba and return home to laud Castro:

"Socialism works. I think Cuba might prove that" (Chevy Chase).
"Castro is very selfless and moral, one of the world's wisest men" (Oliver Stone).
"If you believe in freedom, if you believe in justice, if you believe in democracy,
you have no choice but to support Fidel Castro!" (Harry Belafonte).
"It was an experience of a lifetime to sit only a few feet away from him (Castro)"
Kevin Costner.
"The eight most important hours of my life," Stephen Spielberg describing his dinner with Castro.
"Castro is a humanist like President Clinton. Cuba is simply a paradise!" Jack Nicholson

Yes, it is a paradise for the willfully blind tourists who bring hard American currency beachfront resorts. For the Cuban people, life is virtual slavery marked by rationing, shortages of even the most basic goods and crushing oppression. How do the Cuban people cope? Many of them attempt escape by whatever means, including navigating 91 miles of ocean on nothing more than old tires that have tied together.
Stacy McCain:
Socialism is the antithesis of philanthropy, even though the advocates of socialism repeatedly proclaim their philanthropic motives, so that like the Pharisees, priests and scribes of ancient Jerusalem, they may be praised as virtuous humanitarians because of the good intentions with which they pave the road to Hell.
Socialism has failed the people of Cuba, yet Watson would bring that failure to us. I’m not as generous as Stacy, I won’t credit Watson with good intentions.
Posted by Carol at 8:15 PM

If Cuba is so great, then I suggest that all the people quoted be required to live as the "avaerage" cuban lives for 1 year.
When they return to the USA they'll kiss the ground: be at least 40+ pounds lighter (all food, milk, eggs, meat, etc. is raitoned); unable to purchase clothes because their only available when the ration for shoes, clothing is issued (once yearly); hopefully they haven't gotten sick (no medicines) or needed a angioplasty (balloons inserted are used over and over again until they break), and would have earned a $90.00 monthly salary, IF they were a productive member of the communist party.

When Americans go to Cuba they are treated like royalty and never go anywhere near "the masses." That's no excuse. The only way to be blind to the suffering under Castro is to simply refuse to see. In my book, that makes them complicate in the Cuban people's suffering.