Welcome Instapundit readers! While you're here, please read What Would James Madison Do? 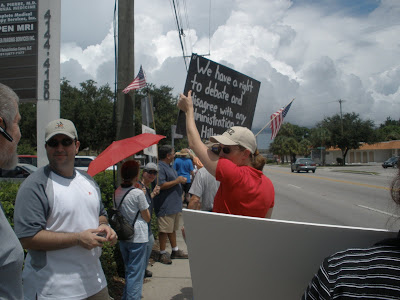 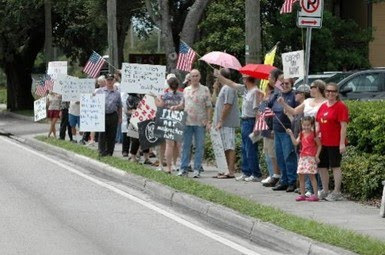 About two dozen people showed in front of Rep. Kathy Castor's office today in Tampa to protest against government intrusion in to health care. The group was cheered on by passing motorists who honked horns, gave the "thumbs up" and several rolled down their windows and yelled "keep up the good work" and other words of encouragement.
Several in the crowd were from Citizens Protecting the Republic, a newly formed group from Pasco County, just to the north of Tampa. We discussed alternatives to ObamaCare, with most in the group agreeing that both tort reform and insurance portability are both needed.
The Tampa Tribune reported that there was one counter-protester at the rally but she must have left before I arrived. The rally ended after an hour and a half with a lot of hand shaking and promises to keep protesting for as long as it takes.

God Bless America. Still the Land of the Free as long as there are patriots alive to keep it that way.