The Fix is asking its readers to vote on the most overrated Governor in the country. It is my dubious honor to announce that at this point my governor, Gov. Charlie Crist is in the lead. 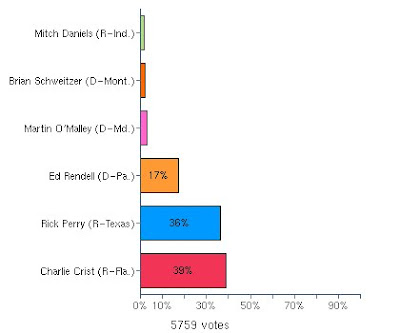 Charlie took quite a spanking in the poll's comments although he did receive one favorable review from a reader who noted that Crist well liked by Democrats. Judging from their article asking if Crist is America's Worst Governor, I think it is safe to assume that Crist is not a favorite of Forbes:

Charlie Crist is an extraordinarily gifted politician, known for his unpretentious and warm demeanor. He might also be America's worst governor. Given that there is a great deal of competition for this dubious honor, that's saying rather a lot.

Among liberals and progressives, there is a puzzling admiration for Crist,long considered by Democratic and Republican veterans of Florida's political scene to be something of an opportunist if not a lightweight. In May, Washington Post columnist E.J. Dionne wrote a column suggesting that conservative discontent with Crist reflected an overemphasis on doctrinal purity. In Dionne's view, Crist raised the ire of Florida conservatives when he embraced President Obama's stimulus plan, and indeed when he physically embraced the president
himself. While it is certainly true that Republican primary voters tend to be
highly ideological, perhaps excessively so, it's worth recounting Crist's
reasons for backing the stimulus plan.

When Marc Caputo and Steve Bousquet of the Miami Herald asked Crist about the
virtues of the plan, he said, "I think it's fantastic. Are you kidding me? We
don't have to raise taxes." Moreover, Crist continued, "we might be able to cut
property taxes some more. We have more money for education, so we can increase
per-student spending. We can spend more money on our roads and infrastructure.
We can provide health care for our people. I mean, it's remarkable." Indeed, something is remarkable, namely Crist's rigid adherence to an ideology more pernicious than orthodox progressivism or conservatism or nudism or anarchoprimitivism. I'm referring, of course, to free-lunchism. (my emphasis)

Yes, Charlie, the darling of liberals and progressives, does embrace "free-lunchism," though the free lunch didn't prevent Floridians from losing their jobs and their home values (if not their homes themselves) while contrary to Crist's pledge, their taxes increased. The article continues:

Incredibly, Crist demanded that Florida use one-time funds to pay for 12% of the state budget. When Republicans in the state legislature took the difficult step of passing a budget that included unpopular spending cuts, Crist turned around and vetoed hundreds of millions in cuts, despite the continuing
deterioration of state revenues. It could be that Crist believes that the
federal government will simply pass a stimulus plan every year, one that will
grow ever larger without consequence to Florida taxpayers. This, of course,
can't possibly be true. As a result, Crist has committed Florida to a fiscal
nightmare, one that will lead to draconian tax hikes and spending cuts long
after he makes a break for the U.S. Senate or finds some other comfortable
sinecure thanks to the good graces of his many wealthy friends. (Emphasis
mine)

Crist is one of those Republicans that we Conservatives are trying to "purge" according to Newt Gingrich. In Newt & Company's "big tent" there is room for free-lunchers, tax and spenders, cap and traders and abortionists. But while that tent swells with what we used to call "Democrats", Newt tells Conservatives to be quiet and go sit in the corner. Is it any wonder that Conservatives find that they are more comfortable outside the tent?

Other bloggers weighing in on the recent RINO onslaught:

Crist's lead has now been lost to Rick Perry from Texas.

I wouldn't be surprised if Crist staffers sent an email telling people to vote for perry just so Crist wouldn't lose another poll.