Barbara Boxer Is A Prostitute 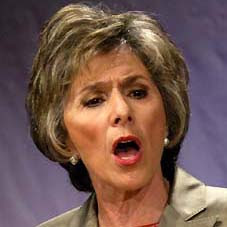 Boxer says that she doesn’t regret the recent episodes — and that any attention her political opponents devote to them will help her in her 2010 reelection bid.

“That only revs up my people,” she told POLITICO. “I use that to send them letters and say, ‘Help me.’ So I get millions of dollars because these people are attacking me in the most ridiculous, unfair way. The more they do it, the more I get energized for my [reelection] race, and the more my supporters help me because they think it’s so ridiculous and unfair.”

Whoa, wait a minute. Boxer treats people who deserve her respect like crap and then plays herself off as a victim to her supporters? Well that certainly speaks volumes about Boxer and the quality of her supporters.

I take back the prostitute remark and apologize to prostitutes who are much more honorable than Boxer could ever be.
Posted by Carol at 9:38 PM