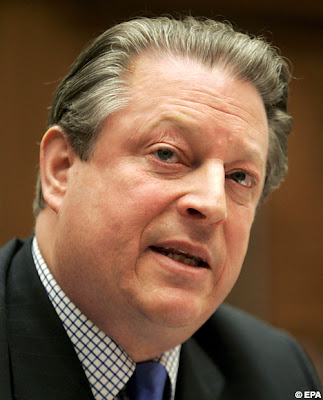 Jimmie at The Sundries Shack thinks Big Al is losing it:
Al Gore has gone completely around the bend, folks. His shame and sense of decency has expired and lies moldering in the ditch where he tossed them because he needed the room for more faux righteous anger.
The righteousness is faux but the anger is real. Al suffers from “I’m smart and you’re not” syndrome and he’s none too happy that the common trash (that’s me and you) are pissing in his Wheaties.
Look, Al is smart. He’s been awarded a Nobel Prize (yeah, Jimmy Carter and Yasser Arafat did lower that bar). If he says that that Global Warming is man-made we need to shut up and listen. He’s made 150 million dollars preaching the Gospel of Global Warming and he’s not in the mood to put up with a bunch of deniers messing with his livelihood when he’s got a $30,000 utility bill to pay for.
Most reasonable people would be uncomfortable comparing Gore’s fight against Global Warming to the fight against Nazi Germany. After all, the murder of six million Jews at the hands of the Nazis is and was the greatest evil in human history. On the other hand, Global Warming may well be one of the greatest fantasies in human history. If there is anyone who knows fantasy, it is the man who invented the internet and inspired Love Story.
Posted by Carol at 9:53 PM