The Coffee Party: Motivated by Hate 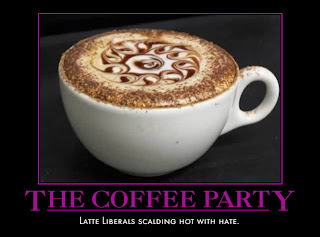 Let's face it, The Coffee Party has not been a huge success.  To the opposite, they come off as whiny, hate filled anti-Tea Party wannabes.  In order to be successful you have to stand for something and standing for bigger government, higher taxes and subordinating personal liberty to the state are not exactly winning rallying cries.

Stacy McCain has a great post on the Coffee Party today at The Other McCain:

Annabelle Park’s experience reminds me of the 2002-06 era of liberal impotence, when the general consensus within the left-wing blogosphere was that Democrats were losing elections because they weren’t angry enough or, alternatively, they weren’t liberal enough. This was the impetus, for example, of the doomed Ned Lamont campaign.

Critics of the Tea Party accuse us of all manner of hateful motivations but the Tea Party's success is built on positive energy and a positive message.  We are not about tearing down institutions but building up individuals.  Our message isn't "Yes We Can" it is "Yes You Can".  It isn't a subtle difference.  One is a group-think slogan that enshrines the government as the noble benefactor.  The other recognizes the power of the individual.  It is no surprise that the latter resonates with more people than the former.

Email ThisBlogThis!Share to TwitterShare to FacebookShare to Pinterest
Labels: The Coffee Party, The Tea Party