Sean Hannity and Marco Rubio at The Villages 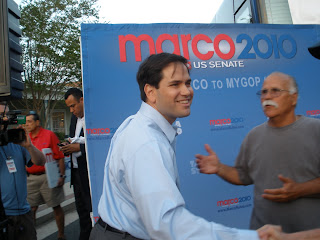 Tonight Marco Rubio appeared at The Villages of Florida where Sean Hannity was taping his show and doing a book signing.  Hannity's guests included Rubio, Lt. Col. Alan West, Coach Lou Holtz, and Tucker Carlson.  I learned an important lesson about attending the taping a show at an outdoor venue-the closer you are the less you see and you hear nothing.  I was about 20 feet from the stage and didn't see a thing.  I moved back and was able to hear most of the show. 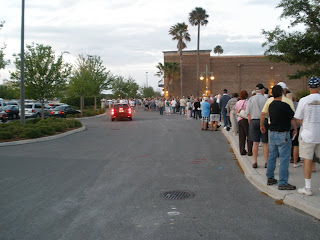 After the show I moved over to Rubio's bus and got a video of Rubio talking to the crowd and then went to the book signing. The line went down the road forever.

Just as I took this picture the crowd broke out in a cheer.  I turned just in time to see Sean Hannity zoom by me in a golf court.  He passed barely five feet from me and I missed the picture.

All and all it was a wonderful time.  Lt. Col. Alan West is an inspiring speaker who will make a wonderful Congressman.  The crowd was enthusiastic and it is an incredible experience to see so many people come out in support of their country.  Any time that I get an opportunity to listen to Marco Rubio I am right there.

Now I'm exhausted.  Enjoy the video but be kind, it is a first for me.

Cool, I was just watching this in a repeat. I wish I had known before I watched I would have looked for you. Great report.