There are No Progressive Liberals in Fox Holes

I suspect that is because for the "Progressives" among us their principals are about as deep as spittle.  Consider this from Mark Steyn:

At the end of last year, in National Review, I wrote about a London Times writer's call for a "secularist and liberal defense of the principles of a pluralist society." I was skeptical, and I wound up the column with one of those itsy-bitsy nuthin' foot-of-page-37 stories that crop up somewhere around the western world every day now - something about Jewish teachers getting taunted by, ahem, certain pupils:

Around 2002 she began to encounter explicitly anti-Semitic speech from Muslim students: “Does someone smell a Jew? It stinks here.” “You are not human, you are a Jew.” Had Anglo-Saxon skinheads essayed such jests, Oliver Kamm’s warriors of secular pluralism would have crushed them like bugs. But when the teacher went to the principal, and the school board, and the local “hate-crimes unit,” they all looked the other way and advised her that it would be easier if she retired. Sixty out of 75 French teachers at the school opted to leave: A couple were Jewish, a few more practicing Catholics, and most of the rest were the liberal secularists on whom Oliver Kamm’s defense of the West rests. The francophone children withdrew, too. And now the principal and most of the students and faculty are Muslim.

Maybe it would have wound up like that anyway. But having nothing to stand in your way except liberal progressives certainly accelerated the process. And as it went at one schoolhouse, so will it go on the broader horizon: If you believe in everything, you’re unlikely to stand for something.

Of course, the "secularist and liberal defense of the principles of a pluralist society" only applies to a very narrow segment of society.  It certainly doesn't apply to women or minorities who wonder off the Progressive farm.  And while our Progressive brothers and sisters are certainly "brave" when it comes to standing against grannies like myself in the Tea Party, they are quick to head for the exits when a real threat comes along.  And to be sure, radical Islam is a much greater threat to the Progressive lifestyle than I or my fellow Conservatives will ever be.

Sometimes a picture really is worth a thousand words: 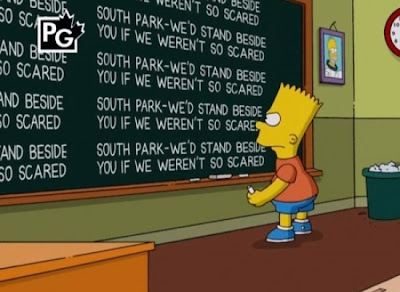 Image from Geekosystem
Posted by Carol at 11:43 AM