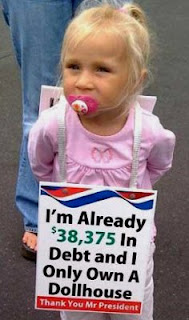 Our president thinks that we are a bunch of ingrates because we haven't thanked him for cutting our taxes.  Well, thank you,  Mr. President, for plunging our country deep in debt and mortgaging our children's future.  Thank you for pushing the Stimulus Bill that gave us those turtle tunnels but not only didn't hold unemployment to the eight percent you promised us but gave us ten percent unemployment for as long as the eye can see.  Thank you, Mr. President, for pushing Cap and Tax for which the American people will pay and pay for.  Thank you, Mr. President, for taking away a health care system that 85 percent of us were satisfied with and replacing it with ObamaCare, that will raise all of our premiums, and taxes, while giving us the same level of care enjoyed in Great Britain.   Excuse me for checking my gratitude at the door.  In fact, screw you, Mr. President.

Image credit:  Doug Ross and by extension, Barack Obama, who is much better at stand-up comedy than leader of the free world.

For more civil commentary check here and here.
Posted by Carol at 4:32 PM

I think Steve Martin said it best, "well excuse me"