Thank you to Doug Ross, No Sheeples Here, Marathon Pundit, and Paco for the links! 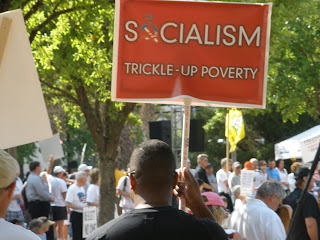 Things are starting to kick in here in Tampa.  I don't have a crowd estimate yet because people are absolutely streaming in to Joe Chillura Park here in downtown Tampa.  Enjoy the pictures I've gotten so far.  I will be updating as frequently as possible.


These two were my bench buddies for a while. 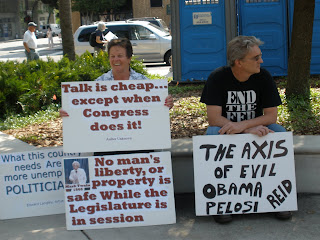 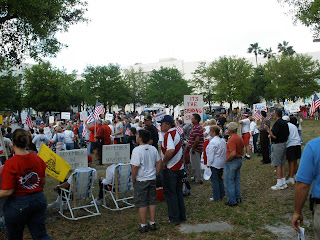 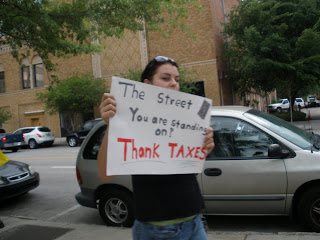 I saw two anti-Tea Party protesters.  The first, a young girl, carried a sign that said, "The street that you are standing on?  Thank taxes."  She seemed a bit confused.  I didn't get a good look at the second guy.  Poor thing, the people by him obviously take very seriously the slogan, "We surround them."  I am thinking he wishes he had stayed home. 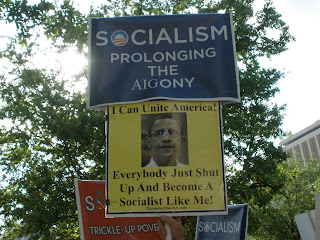 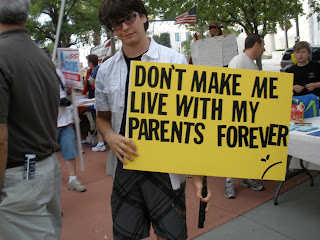 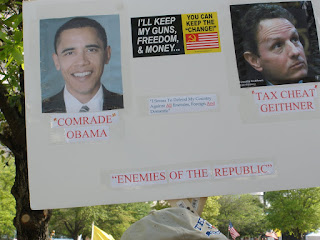 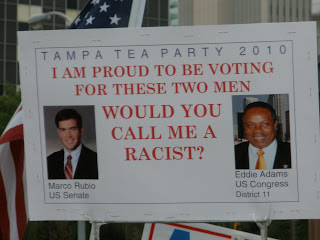 The Rubio and Adams supporters were out in force.  Great to see.  Eddie Adams is running against Kathy Castor here in the 11th District.  Today is the second time I've listenned to Adams speak in public and I am impressed with him.  Marco Rubio would have been here today but he recently learned that his father's cancer has returned and Rubio was spending time with him.. My prayers to him and his family.

Congradulations to Sharon Calvert and John Hendrix for doing such a great job putting this whole thing together.  All of their very hard work paid off.

I have more video but I am having trouble uploading.  Maybe tommorrow.  In the meantime, today was a good day!
Posted by Carol at 5:08 PM

Here's my letter to the local TV station:

The reporter giving your April 15, 10pm report made several derogatory references to "TEABAGGERS".

Your news editor either inadvertently let it pass, or agreed with the reporter.

If you are actually ignorant of the term, please spend 5 minutes on the internet.

I'd point you to the video report but they seem to have removed it from our local Fox affilate site.

fritzkatz, I didn't see any local coverage of our event but it sounds like it is a good thing. What I saw, and have seen at every event I've attended, is people coming together to express a love for their country and a determination to keep their country on the right track. What is controversial in that? Why id patriotism now the subject of scorn?

Thank you for writing that letter. We need to hold media accountable. All I ask is that events are reported without bias. Once upon a time, that was a given.