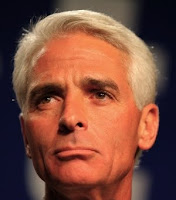 We're five days away from the April 30th deadline for Charlie Crist to go Indie, if he's going to do it.  From Dan Riehl:

How Crispy Crist Cooked His Own Goose

A concise, compelling one page look at the rise and fall of Charlie Crist. More interested in some next step up, than principles and even commitments, it strongly suggests Crist both preceded and ultimately bought into the Obama is all the rage PR of 2008 and ran with it as fast and far as he could in the pursuit of his own selfish aims. As someone else once said, how's that hopey changey stuff workin' out for ya, Charlie?

A year and a half later, as with Obama and the Democrats, the answer seems to be, not very well, I'm afraid.

"A lot of Republicans tolerated Charlie Crist because he could win,'' said Republican strategist Rick Wilson. "It took a long time (for people to start criticizing him) because the people that were uncomfortable with Charlie's departure from conservative principles were really shouted down and told to shut up because this is the guy who can take it all the way."

There is an axiom that politicians eventually find themselves in trouble and when that happens, they need their base to shore them up. Crist never tended to his base, consuming himself instead with hugging the center and left. (emphasis added)

Yeah, as part of what was Charlie's base, and having voted for him, I almost immediately and consistently found myself thinking, "This isn't what I voted for."  Let's face it, wallflowers don't typically run for office but with Charlie it is all about self promotion.  The state and the voters always come in second to what Charlie thinks is good for Charlie.

So, within the next five days we'll find out if I am right about my gut feeling that Charlie will ultimately do what is best for Charlie and not run as an Independent.  The odds don't appear to favor my position but I put my faith in Charlie's unbroken record of putting his political future ahead of all other considerations.