The MSM: Pushing a Myth

About mid-day Friday I got the migraine from Hell. I got home from work around 6:30, put myself to bed and didn’t get back out until this morning. I skipped Saturday altogether. Looking over Memeorandum,I’m half wishing I had skipped today as well.


So far this morning I’ve learned that from Instapundit that at least one Democratic congressman doesn’t care about our Constitution: 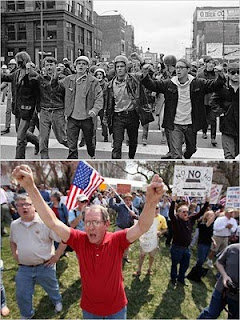 Frank Rich follows in the Times with It’s a Bird, it’s a Plane, It’s Barack Obama! in which he gives us this pearl:

NOT since Clark Kent changed in a phone booth has there been an instant image makeover to match Barack Obama's in the aftermath of his health care victory. “He went from Jimmy Carter to F.D.R. in just a fortnight,” said one of the “Game Change” authors, Mark Halperin, on MSNBC.

Apparently they don’t have access to the latest polls at the Times. Here’s a hint:

The Rasmussen Reports daily Presidential Tracking Poll for Sunday shows that 32% of the nation's voters Strongly Approve of the way that Barack Obama is performing his role as President. Forty-two percent (42%) Strongly Disapprove giving Obama a Presidential Approval Index rating of -10.

On health care, 53% of voters now trust Republicans more than Democrats. The latest weekly tracking shows that 54% favor repeal of the President’s health care plan. Those numbers will be updated on Monday morning.

Overall, 46% of voters say they at least somewhat approve of the President's performance. Fifty-three percent (53%) disapprove.

Not quite Superman numbers, which explains the media’s need to marginalize the Tea Party. The media, including the New York Times, spent the run up to the election touting Obama as a World Savior. We lesser beings just didn’t see it. Now that Obama is nearly a year and a half on the job we have never before seen debt, ten percent unemployment, we’re shedding allies like a cheap sweater and we’ve all but lost our super power status. Rather, than honestly dealing with Obama failings the media spends it’s dwindling capitol demonizing anyone with the tenacity to point out that Emperor has no clothes.

Come November, Obama will be a lame duck president. Couldn’t happen to a nicer guy. How will the media play it then?
Posted by Carol at 11:08 AM