Rep. Alan Grayson Sets a Dollar Value on His Constituents

Congressman Alan Grayson said, “There are 308 million people that pay my salary. Do you know what that breaks down to per person?”

An utterly perfect statement followed by an utterly perfect question.  Really.  The short answer is .000564935 cents.  For simplicity's sake let's round up and say that Rep. Grayson's salary of $174,000 per year divided by 308 million citizens is .0006 cents.

Rep. Alan Grayson had found himself in an untenable position-he had been out of the news for almost one week.  His insatiable ego was growing restless and he needed something to put himself back in the spotlight.  Viola!  The Orange County (Florida) Republican Executive Committee was holding a meeting in public.  Just the venue he needed to thrust himself back in to the news.

And thus it began:

…Matthew Falconer, candidate for Orange County Mayor, quickly challenged Alan’s rudeness. Grayson demanded not to be interrupted, but Falconer quickly reminded the congressman that he is in fact interrupting their meeting.

Linda O’Keefe, member of the Orange County Republican Executive Committee and extraordinary patriot volunteer with the Orlando Tea Party said, “I’m wondering if Grayson realizes that we do still, for now, have the right to assemble! But can’t we have a meeting without being interrupted by our congressman?”

Currently, there are 12, Republican candidates looking to send Alan Grayson to the unemployment line in November.

Tom Tillison of the Tea Party Patriots Live radio show and the Orlando Tea Party, had quite a lively discussion with Alan afterwards for 10 minutes. Tillison said, “I let him know that he’s a congressman and he needs to act like one. I reminded him that these are his constituents.” Tillison asked Grayson, “Don’t you feel that you at least owe them an explanation for your recent votes?”, to which Alan replied, “I don’t owe them anything, they’re trying to defeat me.”

Tillison followed, “You are a U.S. Congressman and you approach these people acting like a thug.”….to which Grayson responded that he was “being attacked.”

It was during this outburst that Rep. Alan Grayson let his constituents in Florida's 8th District know exactly how much they are worth to him- .0006 cents.  Their opinions mean the same to him as do the opinions of all the other 308 million people in the United States.  Not even one penny.  Bet they feel special now. 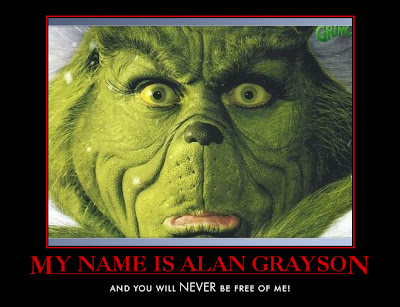 That's a great post and I love the Grinch picture, albeit, I am a big Grinch fan.

You gotta hand it to Grayson for honesty.

Our Critters here in New York equally regard their constituents as worthless, but they're not quite as willing to admit it.

Keep it up, Critters. Every insult educates someone to your reality and deepens the resolve of those who already are awake.

Thanks, Dean O. In the end, the Grinch's heart grew. Don't expect to see that with Grayson.

Quite Rightly, Grayson is one of those people who has absolutely no un-uttered thoughts. He has no idea that the little voices he hears in his head sound ridiculous when they speak out loud.

LOL, love it. I'd like to have his face on one of the fish from Monty Python's The Meaning of Life, with the caption, "YOU'RE INSANE!"