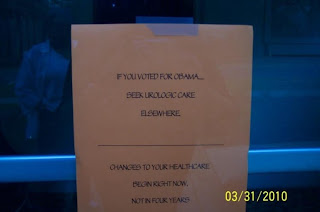 From the Orlando Sentinel:


A doctor who considers the national health-care overhaul to be bad medicine for the country posted a sign on his office door telling patients who voted for President Barack Obama to seek care "elsewhere."

"I'm not turning anybody away — that would be unethical," Dr. Jack Cassell, 56, a Mount Dora urologist and a registered Republican opposed to the health plan, told the Orlando Sentinel on Thursday. "But if they read the sign and turn the other way, so be it."

The sign reads: "If you voted for Obama … seek urologic care elsewhere. Changes to your healthcare begin right now, not in four years."

The urologist will not turn any patients away. The sign is simply his way of letting everyone know where he stands. According to a poll conducted by the Orlando Sentinel the doctor is getting plenty of support. Eighty-three percent of the respondents voted “Good for him” .

Most people are fair minded. They know that ObamaCare will not only have a negative impact on them but also on our doctors. They will likely end up working more hours at less pay and no tort reform means no protection. I can’t help wondering if now might not be a good time for doctors to unionize.

In any case, I echo the sentiments of the Sentinel readers, good for him. I wish more doctors would do the same.
Posted by Carol at 12:37 PM