I've under a cone of silence for a couple of days due to illness but I'm feeling (somewhat) better today and hope to be back to my version of normal soon.  A couple of quick links to get me back in to the swing of things.

First, my prayers go out to Jim Treacher.  A couple of years ago I ended up in a wheelchair for four months as the result of a badly broken leg.  I developed a deep appreciation for the Americans with Disabilities Act.  Trust me, doors are bitch.  Handicapped bathrooms are useless if you can't get in the damn door.  Anyway, at least Jim got a good story out of the deal.  I was reduced to making a story up.  I seem to remember it started out "I was coming out of the outhouse after dark when I tripped over a gator..."  Anyway, God's speed, Jim.

Marco Rubio was on Fox & Friends this morning.  He did a good job of explaining why Choo choo Charlie is wrong in his desire to have illegal aliens counted as part of the census.  Charlie had the chutzpah to compare himself favorably to Ronald Reagan.  Keep up the denial Charlie, it is working out real well for you.

Andrew Sullivan apologized to his readers for giving John Edwards a pass.  Sullivan apparently was blinded by his own kindness (cough, cough, snort).  Oh, but he managed to take several swipes at Sarah Palin under the pretense of writing about Edwards.  Is there any subject on Earth that Andrew can't turn in to a discussion of Palin?

Mary Landrieu is upset.  People are picking on her.  She's sitting under the bus.  Waa, waa, waa: 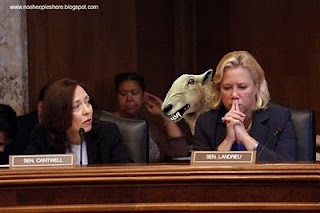 Man, them Sheeple are everywhere!

Sire Troglopundit is distressed that the 2012 GOP National Convention is being held in Tampa.  (Yeah, I know-I'm practicing positive thinking) Look, Tampa is beautiful 10 and half months a year so, come on down Trog, I'll buy you a beer.
Clarence Thomas wisely skipped the SOTU and spared himself a public smack down by his Royal Highness Obama the Giant Ego.  The Daley Gator has the video of Thomas explaining his objection to McCain Feingold.  Something about following the Constitution.  Who does that any more?
Bob Belevdere brings news of Obama's dear Aunt Zeituni.  You remember her.  She is the non-employed, non-documented, non-citizen who is living large on the taxpayer's dime and we can't seem to be rid of because there is apparently a different standard for Obama & Co.
The video from Marco Rubio's appearance on Fox & Friends this morning is up at American Power.  Rubio lays it on the line about the nonsense of counting illegals in the 2010 census.
Great post on Obama the Spendaholic over at Ruby Slippers.  Just yesterday I tried, and failed, to have a rational discussion about the insanity of O and the Bammers spending 2.5 million dollars on a Super Bowl commercial.  I gave up because I was sick as a dog and in no mood to argue with turns every conversation about this president into a conversation about the last president.
Stacy McCain is up to no good down in Birmingham, Alabama.  Sweet home will never be the same.
Pundette reports that Jonah Goldberg severely beat a young with a can of chickpeas.  It seems that folks up north get down right testy in the face of an impending snowstorm.  That never happens down here in the south and I did not pop that little old lady who grabbed the last gallon of water out of my hand the day before Hurricane Charlie.  Didn't happen.
Detective Paco is on the case here and here.  I love geckos.
Doug Ross brings word of Lech Walesa's disappointment in President Obama.  I am a great admirer of Walesa and for my part I agree with him that the world can no longer look to America for strength.  It is a sad situation for all of us.
Pat at And So it Goes in Shreveport is talking about some game that apparently will be played this Sunday.  I wonder if she has a favorite team.
Okay, the head is banging again and there isn't any alcohol involved so I think I had better wrap this up.  Hopefully tomorrow will be a better day.
Posted by Carol at 8:45 PM

Thanks for the linky love and I hope you feel better soon so I can give you a FMJRA.

FYI: The Word Verification word is 'snessed' which I believe the OED defines as 'stressed out from sneezing too much while having a cold or the flu'.