What? Were you expecting groupies? 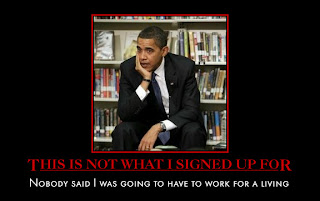 Carol at No Sheeples Here thinks that Obama seems bored:

Quote of the Day

"POTUS delivered a vague and cheerful pep talk to the Organizing For America team these last days, and he again used the old campaign rhetoric of how the hard stuff was hard, and that changing Washington was hard, and that it was hard not to give up but it was the right thing to do…and so forth. The cheers were prefab. POTUS appears distracted, and, if he were not POTUS, there would be the suspicion of boredom."

Wow. You seem particularly mad this time around. You usually don't swear so much in your posts...

I'm amused, not offended. (Guess I had to get the preceding disclaimer up.)

Yeah, I'm not usually a potty mouth and shouldn't have been this time.

I find myself so frustrated these days. I don't understand what is so hard about listening to people. And I guess I am mad, too. The SOTU speech really did it for me. The cheap shot that Obama took at the Supreme Court was just so smarmy and so unnecessary. I don't want my president to belittle people but it seems to be what he is best at.

Anyway, I'll try to keep my posts a bit more civil. I am not normally an angry person and really don't want to be that way.

Carol, great work. Because I can't figure out how to TB to blogspot accounts, just wanted you to know I found you at Bob's place and linked it myself.

Also gonna get you up on the mob roll post haste: http://www.thats-right.com/the-mob/

Keep up the good work.

These are the times that try a lady's civility.

Your anger [and language] is totally justified. We are facing many dangers because that man-child in The White House is not fit for the job.

Quoted from and Linked to at:
Is This What You've Become...