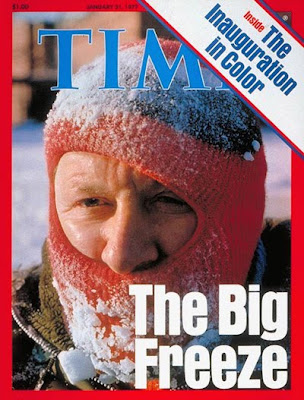 According to the CIA’s analysis, “detrimental global climatic change” threatens “the stability of most nations.” And, alas, for a global phenomenon, Canada will be hardest hit. The entire Dominion from the Arctic to the 49th parallel will be under 150 feet of ice.

"Climate change" was all the rage back in the seventies. We were told that if we didn't act, and act soon, we were all going to freeze to death. As memory serves me, we pretty much ignored all the hysteria, we didn't freeze to death and the scientists moved on to the next crisis.


I have reached the age where I don't pay much attention to fads. I didn't pay that much attention to the predictions of the impending Ice Age back in the seventies because quite frankly, I was more worried that Gary liked Rene more than me. (He did. They married)


That is the thing about fads. They come and go. And we forget about them. But there are fads and there fads. When Nehru jackets were the craze, I just had to have one. But the only thing that suffered due to the purchase of my tan leather Nehru jacket, that went out of style the day after it was bought, was my parent's bank account.

The man with the sandwich board announcing the end of the world on Jan. 7 is usually unfazed when he wakes up on the morning of Jan. 8. He realigns the runes, repaints the sign, and reschedules Armageddon for May 23. The rest of us, on the other hand, scoff.


The fact is that Global Warming is no different than the hula hoop and the slinky. It is a fad that has made it's inventors a boat load of money but the fad will pass. The difference is that with this fad it isn't just individual Moms and Dads getting suckered out of their hard earned money by their pleading children. If this fad doesn't pass soon everyone is going to pay and pay and pay.


The true believers in the Church of Global Warming are unfazed by ClimateGate or any other evidence that comes down the pike. Fortunately, the ObamaCare debacle has our esteemed Congressmen gun shy and battle weary, as well they should be, and thus Cap and Trade is being "put on ice", pun intended, for the time being. And with time, all fads pass.


I look at the picture of myself in flowered bell-bottoms and matching floppy hat and feel silly. I predict that long before the north polar cap melts, Al Gore and the entire Global Warming crowd will be looking pretty silly, too.
Posted by Carol at 11:08 AM