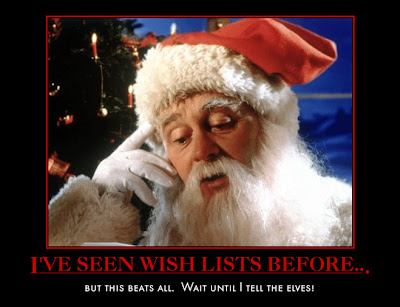 Our friends in the Senate have passed a $1.1 TRILLION spending bill and if their previous spending habits are any kind of clue the 1,000+ page bill has all kinds of goodies in it.
For a hint, let's look at what has passed as wise use of taxpayer so far.
Oh, and don't forget these names: Shelby, Collins and Snowe. These are the Republicans who crossed the aisle and in the spirit of bi-partisanship joined with the Democrats to screw us over.
Enjoy:
Spending on just plain foolishness:
$107,000 to study the sex life of the Japanese quail.
$1.2 million to study the breeding habits of the woodchuck.
$150,000 to study the Hatfield-McCoy feud.
$84,000 to find out why people fall in love.
$1 million to study why people don't ride bikes to work.
$19 million to examine gas emissions from cow flatulence.
$144,000 to see if pigeons follow human economic laws.
Funds to study the cause of rudeness on tennis courts and examine smiling patterns in bowling alleys.
$219,000 to teach college students how to watch television.
$2 million to construct an ancient Hawaiian canoe.
$20 million for a demonstration project to build wooden bridges.
$160,000 to study if you can hex an opponent by drawing an X on his chest.
$800,000 for a restroom on Mt. McKinley.
$100,000 to study how to avoid falling spacecraft.
$16,000 to study the operation of the komungo, a Korean stringed instrument.
$1 million to preserve a sewer in Trenton, NJ, as a historic monument.
$6,000 for a document on Worcestershire sauce.
$10,000 to study the effect of naval communications on a bull's potency.
$100,000 to research soybean-based ink.
$1 million for a Seafood Consumer Center.
$57,000 spent by the Executive Branch for gold-embossed playing cards on Air Force Two. Total: $ 45,980,000
Spending on private concerns:
$3.1 million to convert a ferry boat into a crab restaurant in Baltimore.
$6.4 million for a Bavarian ski resort in Kellogg, Idaho.
$13 million to repair a privately owned dam in South Carolina.
$4.3 million for a privately owned museum in Johnstown, Pennsylvania.
$11 million for a private pleasure boat harbor in Cleveland.
$6 million to repair tracks owned by the Soo Railroad Line.
$320,000 to purchase President McKinley's mother-in-law's house. Funds to rehabilitate the South Carolina mansion of Charles Pickney, a Framer of the Constitution, even though the house was built after he died.
$2.7 million for a catfish farm in Arkansas.
$3 million for private parking garages in Chicago.
$500,000 to build a replica of the Great Pyramid of Egypt in Indiana.
$850,000 for a bicycle path in Macomb County, Michigan.
$10 million for an access ramp in a privately owned stadium in Milwaukee.
$1.8 million for an engineering study to convert Biscayne Boulevard in Miami into an "Exotic Garden."
$13 million for an industrial theme park in Pennsylvania.
$500,000 for a museum to honor former Secretary of State Cordell Hull.
$33 million to pump sand onto the private beaches of Miami hotels.
Total: $109,470,000
Note, this is by no means an all encompassing list. Just a small taste.
Posted by Carol at 8:35 PM

Apparently they have waaaaaay too much in the way of tax revenues (or printing presses). Time to cut back on their budget by cutting back on tax compliance.

Great advice and info! I’ve tried. If you want more information about electronics appliance you can visit us http://www.dealshunt.com/

Excellent site, keep up the good work. I read a lot of blogs on a daily basis and for the most part, people lack substance but, I just wanted to make a quick comment to say I’m glad I found your blog. Thanks,
anti keylogger