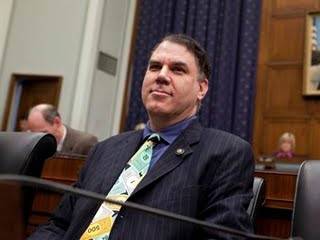 What would any sane thinking person do when someone is saying “mean” things about them? Probably just ignore it, but hypocritical blowhard Rep. Alan Grayson (D) Jerk nixed the sane response in favor of writing a letter to Attorney General Eric Holder demanding that his critic be thrown in jail for five years.

Grayson is frothing over the website ”mycongressmanisnuts.com” which highlights Grayson’s penchant for irrational bluster. For those of you who can’t tell the nutty Democratic players without a scorecard, Grayson is the wacko known for calling an aid to Fed Chairman Bernanke a “K Street whore” and opining that Republicans “want you to die quickly.”

One would think that as an attorney Grayson would be aware that this country has something called the First Amendment which guarantees citizens the right to free speech. But lately it seems that Democrats care little for our Constitution or Bill of Rights.

They haven't cared for the Constitution for years. The Constitution is a document designed to limit the powers of the government. The left and their Democrat representatives are all about the things government can do. They have been that way for some time, with big expanders being FDR and LBJ, but all of their heros from the hollowed halls of the past are dwarfed by Barrack Obama, who believes things are just better when he "spreads the wealth around a little."