No War for Oil 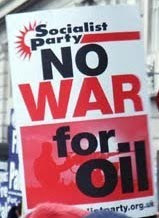 Remember all those people who claimed that the invasion of Iraq was really just Cowboy Bush's way of stealing Iraq's bounty of oil and giving it to his buddies "Big Oil"? It seems that Michael Moore and Viggo Mortensen have moved on to tackle other evils (for the anti-America crowd there will always be something). Still, I wonder how they and their ilk react to this little bit of news:

Those who claim that the U.S. invaded Iraq in 2003 to get control of the country's giant oil reserves will be left scratching their heads by the results of last weekend's auction of Iraqi oil contracts: Not a single U.S. company secured a deal in the auction of contracts that will shape the Iraqi oil industry for the next couple of decades. Two of the most lucrative of the multi-billion-dollar oil contracts went to two countries which bitterly opposed the U.S. invasion — Russia and China — while even Total Oil of France, which led the charge to deny international approval for the war at the U.N. Security Council in 2003, won a bigger stake than the Americans in the most recent auction. "[The distribution of oil contracts] certainly answers the theory that the war was for the benefit of big U.S. oil interests," says Alex Munton, Middle East oil analyst for the energy consultancy Wood Mackenzie, whose clients include major U.S. companies. "That has not been demonstrated by what has happened this week."

Of course, most thinking people realize that if the invasion of Iraq had really been about taking over the oil fields we would have just done it. You can't argue that America is a vast military-industrial complex bent on world domination and ignore the fact that a no point did we make any attempt to take over Iraq's vast supply of oil.

History will judge the war and President Bush based on the ideology of whomever writes it. One thing is certain-there was no "blood for oil."
Posted by Carol at 10:39 AM