From Abortionist Babies are Nothing But The $um Of Their Parts 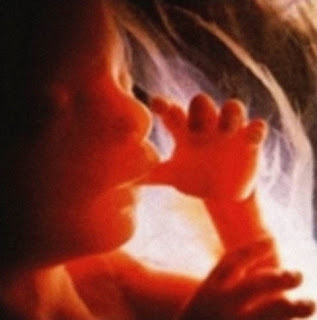 What do you see when you see the picture of an unborn child? The picture at the right is of a picture of a child at the eighteenth week of development in the womb. Pro abortion people look at this picture and argue that this isn't a person. When abortion providers look at this picture, they don't see a person either, they see dollars and cents.
Monique Stuart has written a haunting piece on the sale of body parts harvested from aborted babies.
Reporter Chris Wallace, on an episode of 20/20, reported:
A 20/20 hidden camera investigation has found a thriving industry in which aborted fetuses women donate to help medical research are being marketed for hundreds, even thousands of dollars…Opening Lines put out this price list: $325 for a spinal cord, $550 for a reproductive organ, $999 for a brain…Dr. Jones said the average specimen costs him just $50 plus overhead, but that he charges an average of $250. The law only talks about recovering costs. But on a single fetus Jones said he can make $2,500.
Abortion is an evil practice. Desecrating the bodies of these innocents for profit is unbelievable.
Read Stuarts post here.

Email ThisBlogThis!Share to TwitterShare to FacebookShare to Pinterest
Labels: Abortion