The Sun Is Going To Come Out Tomorrow

Rule 2 is coming in the middle of the week. I had my follow-up with my doctor today and the news was unbelievably good. STAGE ONE!!!
I have a lot of people to thank, some of them are you people. I have been the recipient of the kindness of strangers. It is much appreciated. I don’t know what else to say except, “thank you.” I wish that I could express it better.
Smitty:
Hey: if she's a tax cheat, then she could be Napolitano's special Veteran Outreach Czar, or something. However, her non-approach to literacy may make her a great candidate for Congress.
That deserves a Heh.
Doug Ross:
I've despised Patrick J. Buchanan for years. His veiled calls for racial divisiveness. His underhanded attempts to market holocaust denial on his website. His ludicrous claim that Hitler was really a misunderstood pacifist.
Buchanan can call himself a conservative or a banana as far as I’m concerned. He’s a bigoted, anti-Semite ass.
Donald Douglas:
There's lots of good analysis on crowd size from bloggers, and the numbers are way more the 30,000 (or 70,000). For one of the better analyses I've seen, check Transterrestrial Musings, "An Impression of the Protest."
Honestly, I don’t care how many where there, I am proud of each person who was in DC, Wilshire, Quincy, Lakeland and all over this country.
Carol: 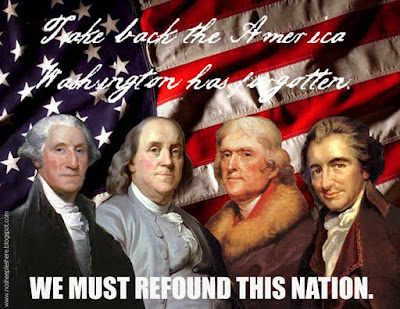 I am right beside you.
Paco:
I suppose a rough Western equivalent would be the chastity belt (which a quick Google search reveals to be of interest only to a small group of people who are given to, er, rather outré fantasies).
“Outré fantasies.” Expand, please.
Jimmie:
1) I haven’t heard Johnson’s name in an awfully long time. Is he still blogging?2) Charles Johnson is about to find himself in an entirely new dimension of pain once Stacy’s friends jump in on this.
Whatcha saying, Jimmie? That we’re a bunch of ass kicking rebels? I know I am…
Gator Doug:
The issue of early discovery means Obama’s lawyers must produce documents, including his hospital records, birth certificate, name of doctor, and all of the signatures, proving his natural born status within 30 days.
I’m not sure where I stand on this, my position changes day by day, but I want it settled.
Stacy:
"The right wing blogosphere is receding away from me at the speed of light, and all I can say is good riddance."-- Charles Johnson, LGF
Hey, act like crap weasel, suffer the fate of a crap weasel.
Pat:
And the mainstream media is all over this, right? Because everyone loves a story with sex, prostitutes, tax evasion, murder...what's next? What? You mean the mainstream media isn't covering this? Golly gee.
Who is this “mainstream media” you speak of?
Pundette:
Come Thanksgiving I'll break out It's a Marshmallow World and start driving my kids crazy again. But then I'll make it up to them by buying them an adorable puppy.
Shhhh. Don’t tell a soul! The man is my total Rule 5 dream come true.
Glenn:
JENNIFER RUBIN: Why Did Holder’s Justice Department Dismiss the Black Panther Case?
Another attorney familiar with the inner workings of the Civil Rights Division agrees with this take. He observes that Department staff “openly and proudly advocate for a different standard” depending on the race of the alleged civil rights violator. He contends that this view extends now up to the attorney general and to staff attorneys who “say it openly at the Justice Department when the topic of ‘reverse’ discrimination comes up.”
See my comment under “Pat” but substitute “equal justice” for “mainstream media.”
Bob:
Who's the head of OSHA is very important as the department has enormous regulatory power. In other words, they have the power to intervene in a lot of areas by issuing directives that have the force of law without having to be voted on by elected legislators. As someone who has worked in government for over twenty-five years, I fear regulatory power more than I fear judicial power because its reach and effect flys so under the radar, out of the sight of the public. Much mischief has been created by regulations and the Left knows full well the benefits of this kind of power.
OSHA no longer fulfills its original purpose. Currently, it serves as labor union’s ‘big stick.
Ya’ll know the sign of a good doctor? He’s the one who will look at you and say, “You’re lucky. You’ve been given another chance. You’re fifty-one years old, pull your head out of your ass.” That loud pop you just heard….
To Be Continued…
Posted by Carol at 11:15 PM

Email ThisBlogThis!Share to TwitterShare to FacebookShare to Pinterest
Labels: Rule 2

Thank you, Bob and thank you for your encouragement.

How wonderful! Thanks be to God. Will say more prayers.