TWAS ACCOUNTABILITTY THAT KILLED THE MSM. Who Knew?

Via Instapundit:
Ed Driscoll says "T'was Accountabilty That Killed The MSM." That's kind of like saying "watching paint dry is boring", even if you've never done it, intuitively you know it's true. I stopped watching the MSM newscasts when anchors decided that a smirk was essential when reporting on anything even vaguely conservative. I dropped my local Tampa Tribune when they decided that local Tea Party events weren't worth their time to report (although Steve Otto did have a really snotty opinion piece on our Tax Day Tea Party). Hasta la vista, baby, we just no longer "relate."
Ed quotes John Nolte at Big Hollywood:

Mainstream news outlets have been caught off guard before, but they used to
play catch up. Today they play “hide the ball.” For as long as I’ve been
politically aware the media’s been biased, but willfully ignoring a major
national news story at great cost to their credibility and relevance is a new
low. So what changed?

Ironically enough, scrutiny and accountability is the cause of much of
the media’s increasingly disgraceful behavior.

Once trailblazer media watchdogs like talk radio, The Media Research Center and Bernard Goldberg were joined with the awesome power of the Internet and Fox News, the media’s sins of omission and commission could no longer be hidden from the general public, or denied. This gave the Fourth Estate two options. They could
either: A) Clean up their act and do their jobs honorably … or B) Surrender
their fig leafs of objectivity and run amok as the ideologues they really are.

Doing their jobs honorably would mean a setback for the Leftist cause,
and so they chose B.

The good news is that this appears to be a suicide run.

In other words, they've chosen ideology over sanity. It happens. The labor unions have done the same thing. Th union bosses may be liberal but the average worker trends toward conservative. Still, they follow the Democratic Party like sheep to the slaughter and now while the workers are "sitting on the bench" and losing everything they own while unemployed, the bosses are still collecting their paychecks like clockwork. Only the SEIU, who has done a marvelous job of recruiting illegal aliens and prostitutes has a growing membership.

But back to the MSM:

The rise of those who watch the Watchmen forced smart, savvy individuals to
consciously choose between being tenacious, curious journalists who will hold
the powerful accountable, or to finally come out of the closet and declare
themselves the ideological warriors they really are. They have chosen to
become the Palace Guards.

They are also cornered, scared and armed with the mighty weapons of the
unethical: lies and the inability to feel shame.

To paraphrase Winston Churchill, we must continue to do our best as they let loose their worst.

Count on them doing just that, as the vote for healthcare “reform” and (especially) the midterms get closer. As we wrote below, at the moment, they have but one card they seem determined to pile drive into the ground, to Cuisinart metaphors. 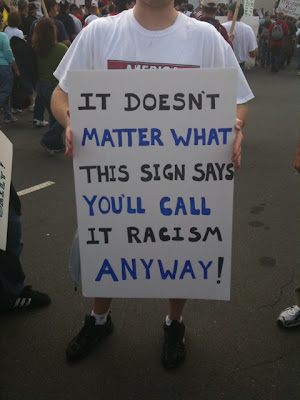