"The U.S. government has gone to court to protect the right of women and girls to wear the hijab, and to punish those who would deny it." 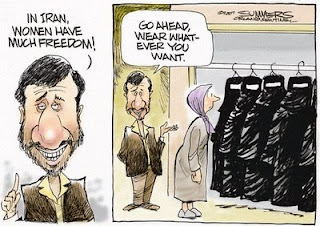 You can tell a lot about a man by what they don’t mention.

Reaction to Obama's weak stance from around the blogosphere:

And So it Goes in Shreveport: Obama v. Bush on Women's Rights in Muslim Countries

The Daly Gator weighs in on perceived reality

No Sheeples Here!: Postcards From The Apology Tour 2

Le·gal In·sur·rec·tion: Obama Speech In One Sentence
Posted by Carol at 12:42 PM

Yes, Carol, you are right. The issue is not of a dressing or minority right. It is universally historical struggle of Women. No race, caste, region or religion had treated woman as equal. Islam does not allow women to enter the mosque or pray together with male partners. Historiclaly Islamic world is the last battle ground for Liberation of Women.
Dhirendra Sharma