PETA Supports The Brutal Murder Of People Not Flies 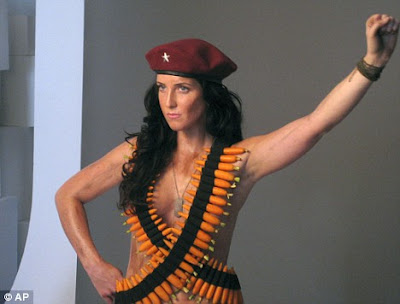 I came across the picture of Che Guevara's 24 year-old granddaughter, Lydia, yesterday at Track-A-'Crat. Today I stumbled across Kill Cubans Not Flies at Babalu's.

"Human beings often don't think before they act," laments PETA while explaining their reaction to President Obama's unthinking fly "execution." "We believe that people, where they can be compassionate, should be, for all animals."

Apparently the blockheads at PETA learned everything they need to know about Che Guevara from Benicio Del Toro. A much more honest depiction of Guevara was written by Dr. Douglas Young:

The real Guevara was a reckless bourgeois adrenaline-junkie seeking a place in history as a liberator of the oppressed. But this fanatic’s vehicle of “liberation” was Stalinism, named for Soviet dictator Josef Stalin, murderer of well over 20 million of his own people. As one of Castro’s top lieutenants, Che helped steer Cuba’s revolutionary regime in a radically repressive direction. Soon after overthrowing Batista, Guevara choreographed the executions of hundreds of Batista officials without any fair trials. He thought nothing of summarily executing even fellow guerrillas suspected of disloyalty and shot one himself with no due process.Che was a purist political fanatic who saw everything in stark black and white. Therefore he vociferously opposed freedoms of religion, speech, press, assembly, protest, or any other rights not completely consistent with his North Korean-style communism. How many rock music-loving teens sporting Guevara t-shirts today know their hero supported Cuba’s 1960s’ repression of the genre? How many homosexual fans know he had gays jailed?

Did PETA think through the symbolism of using Che Guevara, and his granddaughter, in their campaign? If the answer is “yes” it speaks volumes to the PETA mentality.
Posted by Carol at 8:22 PM