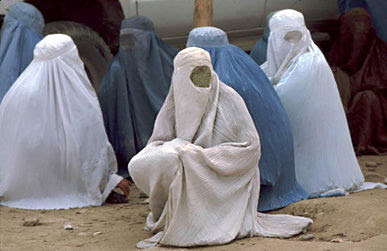 President Sarkozy came out on the right side of women’s rights by saying, "We cannot accept to have in our country women who are prisoners behind netting, cut off from all social life, deprived of identity," Mr Sarkozy told the special session in Versailles. "That is not the idea that the French republic has of women's dignity."The burka is not a sign of religion, it is a sign of subservience. It will not be welcome on the territory of the French republic," the French president said.

Covering woman is nothing less than an act of overt oppression. This should not be allowed in any free society. What of people who coose to cover themselves in a shroud? Who knows? There is no way to know which women choose the burka and which have it forced upon them. If a society is to err they should err on the side of supporting women’s freedom against a state of subservience.