It is being reported at Politico that Sen. Jim DeMint is poised to endorse Marco Rubio in the Florida Republican senate primary race:

But the fight over the Florida Senate race is a proxy battle over the future direction of the Republican Party. The battle pits conservatives pushing candidates who adhere strictly to conservative values even if they face a bigger risk of ultimately losing against more moderate candidates who may stray from the party’s bedrock principles but give the GOP better hope in the general election.DeMint, leader of the Senate’s conservative Steering Committee, has long advocated pushing more conservative candidates, establishing a political action committee designed to do just that. This cycle he’s backed former GOP Rep. Pat Toomey in Pennsylvania and Sen. Tom Coburn (R-Okla.), who is seeking a second term in November 2010.

DeMint’s backing is in direct contradiction to the NRSC which has drawn criticism for their backing of Gov. Charlie Crist, who has angered many in Florida by breaking a campaign pledge not to raise taxes. Crist embraced stimulus money as a means to close gaps in the Florida budget rather than making cuts which have done more in the long term to ensure the state’s financial health. Many conservatives fear that if elected to the Senate, Crist will follow in the foot steps of Senators Collins and Snow, who along with formerly Republican Sen. Specter voted more with the Democrats than with their own party.

Rubio, the former Speaker of the Florida House, as a solid record of supporting conservative positions. Further, at the age of 38 and Hispanic, many feel that Rubio brings badly needed vitality to the party in sharp contrast to the perception that the GOP has become the party of “old, white men”.

As a Floridian, I welcome DeMint’s endorsement and look forward to more prominent conservatives taking a stand for Marco Rubio. 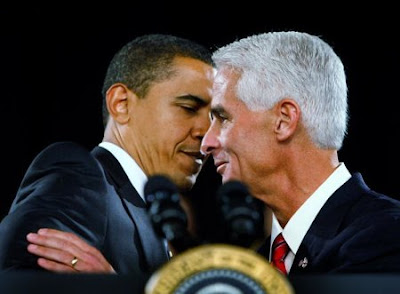 The Daily Kos weighed in Florida race between Marco Rubio and Crist with a picture and a few snide remarks:

The Club for Growth will undoubtedly throw its considerable fundraising heft behind Rubio, and the conservative grassroots and teabagging crowd already see Rubio as one of their own. Crist, for his part, is a constant target of Florida (and even national) wingnut radio. True blood conservatives either hate him already, or WILL hate him before long.

That leaves Crist with ill-respected national GOP leaders as his "base", and they can be used as a foil to further attack him as a creature of DC entrenched interests. Really, that's not a good place to be in this political environment. More and more conservative politicians looking to curry favor with their shrinking but influential base will cast their lot with Rubio. Don't be surprised if some 2012 presidential hopefulls also roll the dice on Rubio. It would provide instant Conservative cred. I'd certainly do it if I was Palin, Sanford, Gingrich, or Romney.

Well Kos, Marco already has “Consevative cred” but if of the above named would like throw in an endorsement I and my fellow ‘wing nuts’ would be happy to have it.

UPDATE II: Speaking of The Club For Growth, Charlie Crist was defeated as the Comrade of the Month by Reps. Henry Waxman of California and Ed Markey of Massachusetts. Sorry Charlie, maybe next month.