Wonkette Dazzles With Her Wit(?) 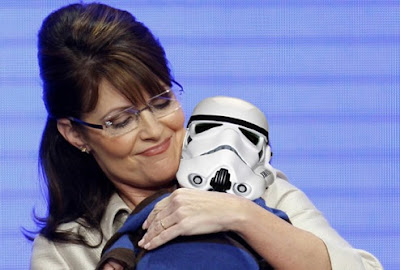 Wonkette, a recent graduate of the Roseanne Barr Comedy School for Angry Feminists, has come up with quite the little zinger. She’s taken to photoshopping Trig Palin, the one year old son of Sarah Palin, aka the woman who drives feminists even crazier than they are naturally inclined to be (which is saying a lot).

Apparently those of Wonkette’s superb comical acumen have tired of mere name calling, though “The Virgin Palin, Our Lady of Eternal Anger,” is just as clever now as it was when my friends and I used it to describe our awful natural sciences teacher back in the sixth grade. My how we laughed in the lunchroom about that one!

William Jacobsen writes: It really is hard to understand why some adults feel the need to make fun of Trig Palin, a one-year old who has Down Syndrome. Politics alone cannot explain it. If you don't like Sarah Palin, fine, but why go after Trig?

Duh! Because Sarah Palin broke the first rule of Being an Acceptable Women According to Modern Feminist Doctrine. Palin is a conservative. Enough said. She I fair game, her family is fair game. If she has any pets, they are fair game.

Pity we didn’t have Photoshop back in the sixth grade. That would have been so way cool.

See also: American Power, The Rhetorican
Posted by Carol at 8:12 AM