FROM PRESIDENT OBAMA, a new statement on Iran. “The Iranian government must understand that the world is watching. We mourn each and every innocent life that is lost. We call on the Iranian government to stop all violent and unjust actions against its own people. The universal rights to assembly and free speech must be respected, and the United States stands with all who seek to exercise those rights.”

Let’s put the President’s statement in the “better late than never” file. Despite the incoherent ramblings of some easily excitable nutjob, nobody wants to use this event as a springboard to launch an attack against Iran. That said, it is vital that the people in the streets know that the American people stand in solidarity with them.

As I write this, Iranian twitterers are reporting use of water cannons, teargas, gunshots, and even some sort of burning agent being dropped on the crowds by helicopters. There’s still no confirmation as far as I know that a bomb really did go off at Khomeini’s shrine, but Reuters is now reporting that Mousavi supporters have set fire to a building being used by Ahmadinejad supporters. And now, suddenly, Mousavi is making some sort of statement where he says he’s prepared for martyrdom. Sounds like the gloves are finally all the way off. 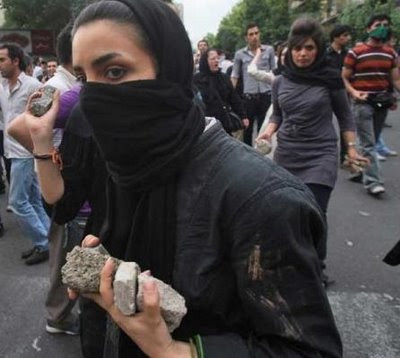 UPDATE: Atlas Shrugs is keeping this story updated. She has a great live feed and is passing the Tweets along as well.